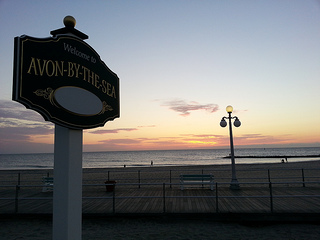 On March 23rd, 2013, New Jersey shore nonprofit Boards By The Sea will host a 50/50 raffle event at the Avon-by-the-Sea municipal building at 301 Main St. from 6-11PM. All proceeds will be donated to rebuilding the town’s iconic boardwalk and beachfront. There will be musical entertainment provided by Pat Roddy, Blue Highways and Running Late. There will also be beer, wine and delicious fine food by several local restaurants. Tickets are $50 and can be purchased at Bungalow Road, Diane Turton Realtors or Jack Green Realty. All ticket locations are all located on Main Street in Avon, Monmouth County. To find out more or to donate to Boards By The Sea, email lbelletier@gmail.com or call 732-567-6715.

History of Avon-By-The-Sea (via avonbytheseanj.com)

During the Victorian era indicative of her growth, the land was officially named New Branch around 1855, but according to what map you looked at or to whom you talk, the land also was known as the Swanton Tract or the Lewis Greene Property. In 1878 the Jersey Shore was in her infancy. Long Branch, Asbury Park and Ocean Grove were very popular summer vacation spots for the wealthy visitors from New York and Philadelphia. Read More

Add Function And Value To Your Home With A Pergola

AIA CEO Wants Architects To Speak Up, Speak Out