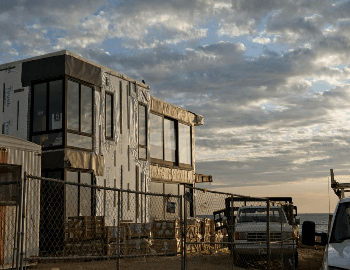 Back in November a study concluded that on average, New Jersey beaches have become between 30-40 feet narrower in the wake of Sandy. According to Stewart Farrell, director of Stockton College’s Coastal Research Center and a leading expert on beach erosion, Mantoloking has lost 150 feet of its beach.

NBC New York has recently worked out that the total sum of sand displaced by Hurricane Sandy — 15 million cubic yards — could fill more than one million dump trucks.

At the New Jersey Shore, about 12 million cubic yards of sand have shifted from beaches such as Long Beach Island, all of coastal Monmouth County and a significant portion of South Jersey. The sand displacement level is much lower in New York, where approximately 3.5 million cubic yards of sand has been lost on Coney Island, the Rockaways, Gilgo Beach, Shinnecock Inlet and Westhampton.

Where Home Builders Stand At The Start Of A New Year